Chris came to be our pastor in June 2016. He married his wife Sara in 1995 while attending Southwestern Baptist Theological Seminary in Fort Worth.  Chris and Sara have two children: Leighann, a college student studying music,  and Stephen, a budding theater star in high school.

Chris grew up in South Florida and graduated from Palm Beach Atlantic University in 1994 with a Bachelor of Science in Psychology. He graduated from Southwestern Seminary in 1999 with a Master of Arts in Church Music and has served in lead roles in churches since he was 17 years old.

Chris enjoys spending time with his family, working out and drinking coffee. 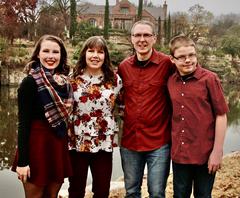